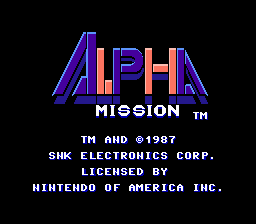 In a far galaxy of Tetrenov cruel wars raged. Eventually, opponents so exhausted each other that on ruins of the old world of an opportunity to live was not any more. Having united, old opponents moved off in searches of the new worlds, suitable for life. And soon researchers came across the planet Earth which looked the quite good candidate for the habitat. Also new war, perhaps, the last for them began. At the same time on Earth release new military development – of ASO – spaceship of the last generation. You also should steer this ship in the course of the game.

of Alpha Mission ( of of ASO: Armored Scrum Object in Japan ) represents the shooter which is originally released on arcade machines,