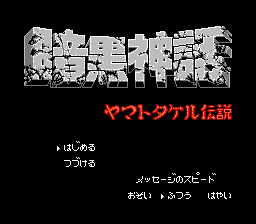 "Ankoku Shinwa: Yamato Takeru Densetsu" there begins the narration while of Yamato was only thirteen years old. His father is killed under strange circumstances. The boy looked through things of the father and found the letter which became the first proof in murder investigation. From this point we begin to play for the main character.

"Ankoku Shinwa: Yamato Takeru Densetsu" - quest in the Japanese style with prospect from the first person, one of the few in such style of execution for of NES . By means of the menu on the screen it is possible to choose actions (to look, take, to move also others).