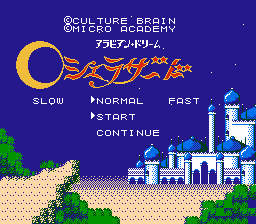 In the Japanese version of rather impudent look the guy in a blue shirt and a turban runs on labyrinths between bushes. American it is strongly improved, added with full-fledged role elements and rollers, but eventually it is possible to find also old kind green bushes.

The game Arabian Dream Sherazaado was innovative for the time, combining the elements of Action-adventure and of RPG , and at the same time was based on the well-known Arab fairy tales (besides the main character in the course of passing moves in five various periods of time).