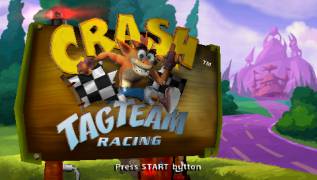 There are no rules and no rights! Tireless fox Crash is with us again, this time in the form of a fearless racer. However, having moved to another genre, the game has not lost the humor and flavor of the series. Moreover, the writer Jordan Reicheck, also known from the game Crash Twinsanity, worked on Crash Tag Team Racing. Once, Dr. Neo Cortex, already defeated by Crash, decided to get even with the offender. The villain lured the red-haired hero into a seemingly innocent racing championship in order to bury him forever under the asphalt of dangerous tracks. But you won't leave Crash, will you? There are no rules in these races! Each driver's car is equipped with a machine gun turret, if you can't snatch victory with speed, take it by force, because rivals do the same! Create a car monster! Parts of rival cars can be used to strengthen your own car. Walking is good! You are free to leave the cockpit of the racing car and go explore the world "on your own". While hiking, you can find exclusive spare parts and open additional tracks. Turn the world into rubble! The roads are full of destructible objects, do not let the machine gun idle! More fun with friends! The collective game is designed for eight riders.