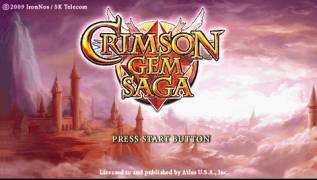 Crimson Gem Saga & ndash; the real gift to those who missed old kind tactical RPG. Work of artists causes delight and admiration, and visual registration fascinates at first sight. The main character ideally fits into such picture of the world. Young man Killian von Rochoff & ndash; the graduate of military academy, among other moved on huge Rubin's searches, a sacred artifact on which the destiny of the world depends. The gameplay consists of two parts: maneuvers on the tactical map and skirmishes with opponents in infighting. Both phases are closely interconnected. Landscapes will be arranged so that to motivate the player to manifestation of cunning and sharpness. In breaks between battles there will be an opportunity to send on & laquo;