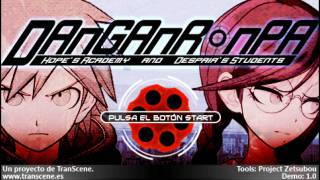 You, along with 14 characters, end up in a school court. A school called "High School of Hope" is run by the crazy bear cub Monokuma. The rules set by them must be followed strictly. In this game, you need to identify the criminal, and at the same time be able to prove your innocence. The offender should be punished, and if the offender is not found, the punishment awaits everyone.

The game is made in a very unusual style. This is noticeable in the use of scene dynamics and the combination of 3d and 2d objects. In this game you will be able to move around the school in 1st person with 2.5d environments. The main feature of the game is a dynamic confrontation in the general court, where everyone makes their assumptions and accusations, and you have to manage to oppose your thoughts to the statements of your opponents in a split second. To succeed in the passage, you will need speed and the ability to think, as well as a good knowledge of the Japanese language (Or patience and the ability to quickly press the dialog skip key).