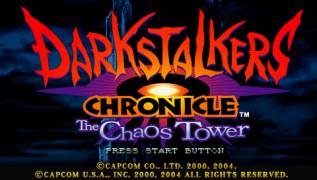 Darkstalkers Chronicle: The Chaos Tower is a themed spin-off from one of Capcom's most successful flat fighting game series, Street Fighter. Darkstalkers Chronicle appeared more than ten years ago, we don’t even remember on which gaming platform, and immediately gained popularity.

The main difference between Darkstalkers Chronicle and the closely related Street Fighter series was, first of all, the gloom and brutality of the game atmosphere. However, in general, this is a classic fighting game: fast, spectacular, quite "smart", forcing the gamer to learn various combat techniques and combinations.