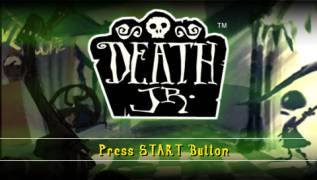 Death Junior, "Mr. Death Junior", went with friends on a tour of the museum. Everything would be fine, but after a scheduled inspection and opening of the next exhibit, all his friends were trapped, and an unknown force that could enslave our world got out into the wild. Now, paradoxically, the lives of his friends and everything else on Earth depend on a guy with a strange name - Death Jr.

Alien worlds are waiting for you! Of course, to go on a tour of other universes should have been under different circumstances, but since it happened ... Because of the enemies lurking at every corner, the journey has become even more exciting! You look at amazing landscapes from a third person, but you control the hero like in First-Person Shooter.

The enemy is cunning and outnumbered, but you have a weapon! All kinds of firearms "toys", coupled with explosives, will be a good help in the fight against the forces of Darkness.

There are many interesting things on Earth too! The heroes are waiting for a fascinating exploration of the secret rooms of the Museum, the fight against evil in their own school, and even an excursion to a madhouse!