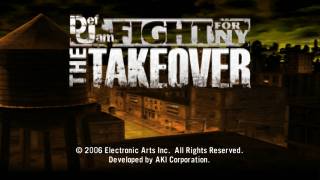 When "mutual misunderstanding" prevails and the intricate interlacing of phrases no longer plays any role, a rare hip-hop star will miss the chance to arrange a real Def Jam Fight for NY: The Takeover!

Armed with bottles, bats and steel pipes, America's loudest, richest and wildest men are having a showdown right on your screen! It doesn't matter how many "bryuliks" weigh around the neck, how many gold teeth sit in the mouth, or what size disks the brand new "hummer" has. The streets of New York respect only a strong fist and the reaction of a tiger. Fight for the status of leader among real men!

What people and without protection!
You will not find a single ordinary guy among the bonebreakers who have taken to the streets. Busta Rhymes, Carmen Electra, Lil' Kim, Ludacris, Method Man, Redman, Snoop Dogg and Xzibit - this is not a complete list of angry rappers.

In any mess there is an extreme one!
And Def Jam Fight for NY: The Takeover is no exception. The twisting plot will reveal the mystery of a sinister character named D-Mod, who has seized power in the city of lights.

When traveling, look back!
Night streets are not the safe tatami of sports clubs. The crowd will instantly turn into a multi-armed opponent. Armed spectators always have their own opinion about who should stay on their feet.

Create your own rapper.
There are thousands of little things at your disposal, including tattoos, as well as a sea of ​​clothes from Reebok, Phat Farm, Shan John, Jordan, Ecko Unlimited, Enye and other famous brands.

Argument your superiority.
You can knock down arrogance from presumptuous "stars" using the techniques of five martial arts. Sambo, kickboxing, wrestling, freestyle wrestling and another secret style are presented for your judgment.