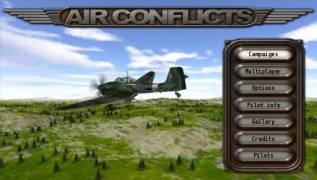 The game features authentic aircraft models, 13 campaigns with over 240 missions, and excellent graphics, immersing the player in a rich, realistic world."

Missions are based on the main historical events of World War II. For successful sorties, the player receives awards and new titles. You can play as the US Air Force, British Air Force, Luftwaffe or the Red Army. In a separate gallery you can see three-dimensional models of aircraft and performance characteristics of their real prototypes.