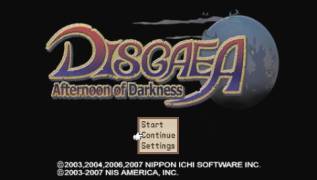 Disgaea: Afternoon of Darkness & ndash; it is port of original PlayStation 2 of the Disgaea version which appeared in 2003-ohm year. All acquaintances according to game series of a counter successfully removed to PSP option, having a little been replenished small pleasant with bonuses. In a word, a portable dream for those who in a subject. The plot of a game is tied around characters familiar to admirers of a series represented by Prince Laharl and its team which battle for the right of country government of Netherworld. The Netherworld & mdash; the place covered with a gloom, the place is more dark than a black hole, the place which is located in depths of depths of the seas. It is the damned earth where the evil dominates and where there live the most terrible and dirty beings. Nobody knows where it, but all it