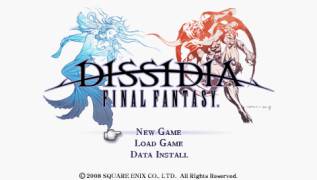 Dissidia: Final Fantasy - bright and colorful 3D fighting game for PSP. Each fighter has some skills and techniques inherent only to him. The player will also be able to equip their hero with weapons that allow them to carry out additional attacks and inflict more damage. Two people will be able to connect their consoles via Wi-Fi and get together in a single duel. The fighters are familiar characters from the Final Fanta universe.