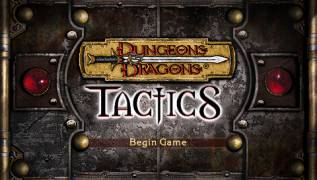 The plot of the game tells about two dragons who compete with each other for power. You find yourself in the thick of the conflict and must get out of this story unharmed. D&D: Tactics will offer you an original thrilling adventure set in the DUNGEONS & DRAGONS universe. You play the role of a mortal human child who is the target of two opposing dragons. All your actions in the game, the way you will solve the tasks, is directly reflected in the development of the hero and affects the end of the story, in which it will become clear which side your ward will take - Good or Evil. D&D: Tactics contains the full set of DUNGEONS & DRAGONS character classes, including Barbarian, Bard, Cleric, Druid, Fighter Monk, Paladin, Thief and Wizard.

The new role-playing game will make the most of the PSP's wireless capabilities and offer an interesting multiplayer mode: a cooperative mode of passage will allow a group of players to go through a single-player campaign together, and a deathmatch mode will offer to fight in several arenas specially designed for this. D&D Tactics will also support downloadable content, allowing you to extend your enjoyment of the game by downloading new maps, weapons, and more.