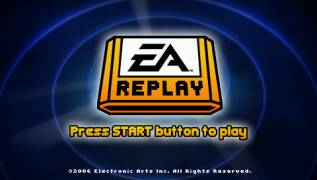 A game with a telling name - EA Replay, will allow you to replay your favorite childhood games. Just listen - Road Rash, Desert Strike, Syndicate. Do you recognize? Still would! After all, these are the best games of Electronic Arts, on which a whole generation of gamers grew up. We are returning to the times when the good old Sega made us sit days and nights in front of the console, when films were exclusively on video cassettes, when the personal computer seemed to us something distant and unreal. It was console time and it's back on PSP screens!

EA Replay - a collection of 14 selected games of the last century!
- Ability to quickly save at any time. You no longer need to write down the level codes in a notebook :)
- AdHoc network mode. Now RoadRash II, Mutant League Football and Budokan are wireless!
- Power-ups scattered throughout the different game levels will let you uncover additional content from the past