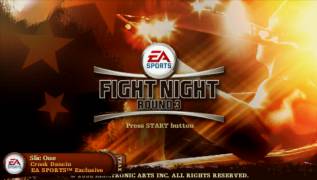 From time immemorial, men solve their problems quite simply. Old as the world, the method was known in the ancient world, but does not lose its relevance to this day. Tit for tat, fist for fist: a fair duel will put an end to any disagreement. In the 20th century, unorganized brawls turned into a big sport. Boxing gathers millions of spectators, a lot of money is spinning around the ring, but the two behind the ropes are far from empty fuss. They live in a different world with different laws. Fight Night Round 3 is a unique opportunity to look at this world from the inside.

This you have not seen and certainly did not expect from the PSP!

The boxers move with the grace of living athletes and look like Hollywood stars. Fight Night Round 3 is a hymn to brute strength and brutal beauty. This is a window into the universe of real men's sports. Are you ready for a sparkling show?

For the first time, a game is more spectacular than a live broadcast! Fight Night Round 3 is insanely interesting to play, but ordinary viewers will not be left out. The quality of the graphics blurs the line between reality and virtual illusion. The same thing happens on the screen that is shown on TV broadcasts. Only the battles here are brighter and more effective.

The world champions will teach you how to fight. Break down the tactics of the legendary Ali and the great Oscar De La Hoya. Embrace their style. Don't want to imitate someone else? Then create your own action plan for all occasions of boxing life!

Variety of techniques, many styles. Keep your opponent at a distance with long lunges. Dodge monstrous blows with swift dives. Love risk? Then rush into close combat! With a good reaction and a bit of luck, you can knock out your opponent.

Big boxing is not only fighting in the ring. Rivals tend to know each other well and really hate each other. High-profile fights are preceded by informal clashes and press conferences, during which the fighters are seriously inflamed. Fight Night Round 3 offers a unique look behind the scenes of boxing. You will become a participant in all events preceding the battle!

Don't underestimate the enemy! Adaptive artificial intelligence closely monitors your every move and methodically develops countermeasures. Don't be surprised if one day all your tricks turn out to be useless.

Repeat, change or write your story! You can take part in the biggest battles. You have the right to bring boxers in the ring who have never fought in real life. Finally, it is in your power to light new stars in the sky of sports and bring new names to light!

Fight with a friend! Fight Night Round 3 takes advantage of the networking capabilities of the game system and lets you find out once and for all who is really the best fighter!