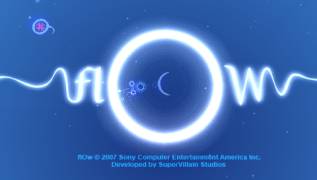 fFlow has become one of the most popular PS3 games distributed through the PlayStation Store. In a short time, the game gained a lot of fans and Sony decided to port it to the PSP.
flOw for PSP has kept an incredibly fun gameplay that will immerse you in an ever-evolving and bubbling abyss of underwater life. You have to manage waterfowl - move, hunt, fight for survival, grow and develop.

You will be able to dissolve in the blue abyss and feel like a fish in water.

Features of the game
* In a single game you will find 5 waterfowl creatures that live in a variety of conditions and waters.
* The more experience you gain, the more difficult tasks flOw will put before you.
* The difficulty of tasks is dynamically adjusted according to your experience of survival in the virtual underwater world.
* In the PSP version of flOw, up to 4 people can play over Wi-Fi at the same time - either compete and compete, or join forces and help each other.
* The gameplay of the PSP version of flOw has been completely redesigned to suit this portable entertainment system