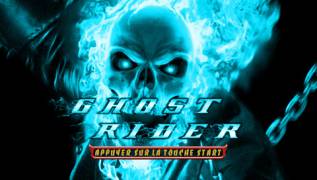 Some meetings never have to take place as well as some words never have to fly from lips. Otherwise then it will be difficult to prove that you did not conclude the bargain. The professional racer Johnny Bleyz promised to give soul for life of the father. In exchange for execution of desire the Satan turned Johnny in the ghost murderer doomed to ride for centuries the infernal motorcycle and to carry out Darkness instructions!

Based on comics of the Marvel company, the history Ghost Rider narrates about the racer damned by Mephistopheles. But, despite of the contract signed with darkness, Johnny Bleyz does not hurry to leave the inner self. Instead of elimination objectionable to hell of people, Ghost Rider begins war with the Evil! One by one disappear the servant Dyavol, closer and closer Johnny approaches the one who doomed him to intolerable anguish, in him revenge fire inflames more and more brightly! But what will be when the long-awaited meeting, at last, takes place?

the History which conquered the world! For the first time appeared in 1972, comics Ghost Rider were sold out on the planet with a circulation of forty five million copies! Interest in Ghost Rider does not die away to this day! Since 2005 the writer Garth Ennis and the artist Clayton Crane are engaged in continuation of the well-known comic book, and the Sony Pictures company released the movie of the same name recently.

Without mercy! You should not feel sorry for those who once already ended up in hell. Stage them a deadly massacre with a chain and a rifle from a bright flame! Only this way it is possible to send Lucifer's servants back to a non-existence.

Gift of the Satan! The illusive motorcycle has powerful forces which will help with hard war. It goes on water and soars up into air with ease of the demon from a flame and steel. The generous gift of Darkness will turn back against her!

Road to an underworld! The way of Ghost Rider conducts it to hell where the most fierce fights will take place. But till that time Johnny has affairs above. You will visit the places, known on the movie, including Quentin Carnival and Caretaker' s Graveyard, and also sweep with a breeze on a wall of a huge skyscraper.

of Force! Improve the motorcycle and a fiery chain, study new killing receptions, train the Racer.

the Acceptable surprises. The mass of entertaining trifles is hidden in a game. Thematic drawings, confidential characters, an interview with developers will help to like the atmosphere of Ghost Rider

of Ghost Rider in reliable hands! Behind shoulders at developers of several checked hits. The Climax studio proved the professionalism on the example of ATV Offroad Fury 3, Sudeki and MotoGP: Ultimate Racing Technology.

Only on PSP! Especially for the pocket console new levels, bosses and the whole modes of a game are created. By means of wireless Wi-fi technologies you will be able to fight with three living rivals and to participate in a collective infernal motorcycles race!