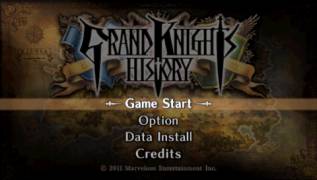 Grand Knights History is an online JRPG in which you have to fight for one of three kingdoms. Its actions take place on a continent where three states are at war. Players take on the role of a knight in one of these three powers and fight against other sides in the conflict. As with earlier Vanillware games, combat will be shown in 2D. The game begins with the creation of your knight. There are three main classes you can choose from - knight, mage and archer. Each class is divided into three subclasses to further specialize your character. You will be able to customize your characters like hair style and color, voice, personality, name and exclamations after victory. The personality parameter affects the growth rate and the line of behavior will affect what the character says. You can also equip your characters with different weapons. By using this weapon in battle, your characters will increase their base weapon skill and be able to learn new skills.