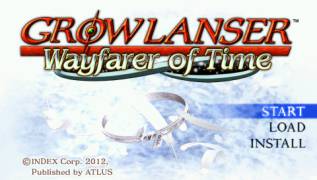 Growlanser: Wayfarer of Time for PSP & mdash; it is the updated port with PS2 (Growlanser IV: Wayfarer of Time) on PSP. It is worth carrying new events, new historical scenes to the list of the added features, over forty are various the terminations, new characters, bystry loading, a possibility of the admission of messages. Growlanser action: Wayfarer of Time occurs in 2000 after the end of war between angels and people. Being a hi-tech civilization once, the mankind lost everything