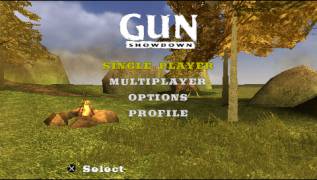 The silence and rest for a long time left the Wild West! With arrival of white people the rage, lust and greed captivated the earth of the New World. On those who remembered wild mustangs in mountains who listened to Indian songs in plains bloody hunting is conducted! Every day turns into fight where only a faithful horse yes the fatherly winchester will be helped to be lived till the morning. But also among those who devoted the life to robbery there were still real cowboys! Honor and thirst to fight for justice & mdash; here what distinguishes them from ruthless criminals and gives strength to throw down a challenge to an arbitrariness. Soon in unequal fight the last from them will disappear. But before he will manage to change destiny of the Wild West!

of Gun Showdown & mdash; this fascinating continuation of the legendary cowboy's fighter of GUN released only for PSP! A new game is unique, in it events of the previous episode do not repeat. Horse pursuits, robbery of the train, firefight in the best traditions