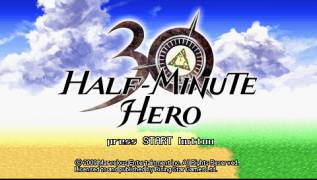 An absolutely ingenious concept for those who love Japanese RPGs, but who do not have an extra two weeks to spare. Half-Minute Hero is an RPG that tries to squeeze long stories of saving kingdoms into a measly half-minute. The idea is this: There are monsters, cities and a hero. The black magician began to conjure a monstrous spell. You have exactly thirty seconds to upgrade the protagonist and cut down the villain in the corridors of his castle. True, not only - there are only four game modes in "Hero .." that differ in tasks and even genre. In addition to jRPG, a shooter and RTS are also hidden here.