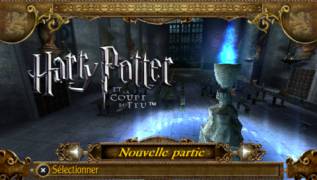 Harry Potter and the Goblet of Fire
PlayStation Portable - PSP

Harry Potter And The Goblet Of Fire is the fifth installment in the Boy Who Lived series of games. The release of the game is timed to coincide with the release of the film company Warner Brosers, based on the fourth book by D. K. Rowling.

Harry, Ron and Hermione are back, and players will be able to relive all the best moments of the film, from the Quidditch World Tournament camp to a terrible duel with Lord Voldemort himself.

The real adventure begins when Harry is named fourth in the Triwizard Tournament by the Goblet of Fire. Each contender for victory in an international tournament must cope with a fire-breathing dragon, rescue his friends from the icy depths of the lake and go through a huge labyrinth full of puzzles and dangers to the end to get the precious Winner's Cup.

Players will have to endure far from the most rosy days with Harry and his friends. Evil is still somewhere nearby, it is growing and gaining strength to destroy our hero...

All the magic of the film is in front of you. The events in the game are based on the movie. The Wizarding World of Harry Potter comes to life with all the characters modeled and copied from the actors for the first time. The entire environment, all the items from the movie, the faithfully recreated Hogwarts with all its houses, classes and teachers complete the exciting gameplay.

The new spell casting system will give players a better feel for magic. The controller will respond to each wave of the magic wand. Players will be able to enjoy a new spell selection system, using complex magic to improve their abilities.

One spell is good, but three is better. Players will have the opportunity to combine their efforts, using different abilities and spells of two of their friends in a collective mode. This will help to combine magic and produce more complex and destructive spells than before. Ron and Hermione are almost always available to help, but like the movie, there are moments in the game when Harry has to fend for himself.

Accio, magic beans! Players will be able to use the "Accio" spell to attract magic beans that add strength to Harry, Ron or Hermione, as well as use special magic cards that provide advantages in the passage of subsequent episodes.