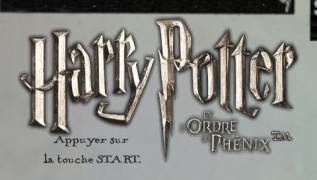 Harry Potter and the Order of the Phoenix
PlayStation Portable - PSP

Clouds are gathering over Hogwarts. This time, the famous school and all its inhabitants are threatened not so much by an external enemy as by internal strife, undermining the power of magicians. Returning to his fifth year, Harry finds that the wizards are strenuously pretending that there was no fight with the evil Lord Voldemort. Minister for Magic Cornelius generally believes that Headmaster Albus Dumbledore is deliberately scaring everyone with stories about Voldmort's return in order to get him, Cornelius, a place. Wanting to keep events under control, he appoints a new teacher of protection against dark magic - Dolores Umbridge.

However, her course actually prevents students from developing their abilities, leaving them without new knowledge and protection. Realizing this, Harry and his friends take matters into their own hands. Teaming up with other students, they create a secret society called Dumbledore's Army. Training fellow students, preparing for a grand battle and the fate of Hogwarts as a whole is now in your hands!