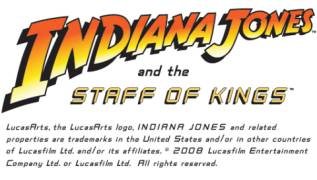 Indiana Jones and the Staff of Kings
PlayStation Portable - PSP

Our planet is full of secrets and riddles, and to only one person on forces to solve them, having overcome all obstacles. His name & mdash; Indiana Jones! In Indiana Jones and the Staff of Kings you as the famous archeologist and the adventurer will go to an improbable travel on all planet. At the end of the way you are waited by a unique award & mdash; Moisey's Staff. However not only the old times of India hunt for a bible relic. Artful Magnus Veller with the helpers tries to reach an artifact too, and it will not stop before anything on the way to the purpose. Behind a window 1939, and all planet is discovered for you! India has to do a hard way of the Chinese quarter to San Francisco to the wild jungle of Panama. Of course, it will be disturbed by dangerous enemies, but sharpness, fists and a right whip will not allow to be gone. In fight against opponents it is possible to use any objects of an environment & mdash; Mr. Jones was always famous for the acrobatic abilities. Separate episodes in a game were at all created under impression of the brightest scenes from movies about Indiana. Developers managed to transmit spirit of such shots as a pursuit of a train from & laquo; Indiana Jones: In search of lost