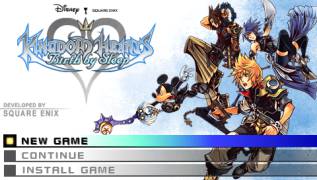 The plot of Kingdom Hearts: Birth by Sleep consists of 3 scenarios, each of which focuses on the efforts of one of the three main characters to find Master Xehanort. At some points, the paths of the main characters will intersect, but most of the time each of them travels alone. The main characters are Ventus, Terra and Aqua, who have their own fighting style.

Ventus: Known as "Ven", his strongest aspect is speed, he wears a keyblade. Terra: specializes in strength, also carries a keyblade. He is the leader of the group and is the brother of Ventus. His personality is quite cool and he can be described as a strong and quiet person. Aqua: The only woman on the team who specializes in magic, just like everyone else carries a keyblade. The most serious of the team, but worries about her friends when they're in trouble.