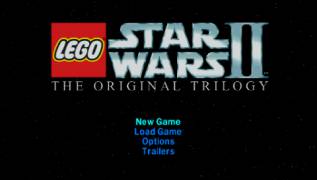 Build, Fight and Break! So, the new LEGO Star Wars II game is on the shelves. This time it touches on the classic trilogy (Episode IV A New Hope, Episode V The Empire Strikes Back and Episode VI Return of the Jedi), in this game you will see the Rebels fight the Galactic Empire and you will be able to rebuild this galaxy yourself. From Darth Vader's pursuit of Princess Leia to fighting on the resurrected Death Star, the LEGO brick game is peppered with puzzles and the signature humor that made LEGO Star Wars so popular.

Game Features:
- From Luke and Princess Leia to Han Solo and Darth Vader. You can play as over 50 of your favorite characters from the Star Wars universe in LEGO form.
- Build and Customize in millions of different ways. For the first time in your life, you'll be able to craft and ride new vehicles, build new creatures, and explore the world of the classic trilogy. Create and customize new characters and their abilities. With new highly destructible environments and fun puzzles, playing LEGO Star Wars is more fun than ever.
- Play with your friends.