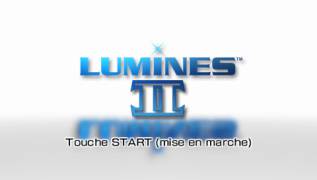 Play in a new way! Tetsuya Mitsuguchi, fashion designer of games, brings you Lumines II, the sequel to the mega-popular Lumines! This is a new look at Tetris: only square blocks fall from above, but ... pay attention to their color! Match the squares of the same color to make the same color blocks of bricks disappear. Anything larger than 2x2 will be erased. Fight against time, against computer opponents and against living - wirelessly or put together a puzzle of bricks in puzzle mode! Defeating opponents, make them your avatars.

Unlock new levels and new musical themes! Enjoy Lumines II with wonderful Japanese pop music integrated into the gameplay. All your actions are accompanied by sounds that are woven into the melody. The better you play, the more interesting the theme music becomes! The music depends on the tempo of the game and vice versa. Clips of popular western performers such as Black Eyed Peas, Chemical Brothers, Beck, Gwen Stefani and others are integrated into the game.

Features:
From the creators of Rez and Every Extend Extra
The soundtrack is inseparable from the gameplay - make music by playing
An abundance of modes - from duels to puzzles
Over 60 levels and over 100 puzzles
Clips of world pop stars are integrated into the game