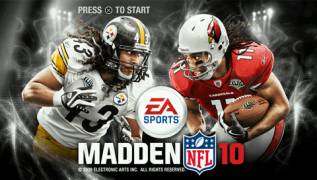 Madden NFL 10 - The legendary football series enters a new era in which NFL fans can get everything they see during the Sunday broadcast of matches from the USA - except for grass stains on clothes. Madden NFL 10 takes the authenticity of the game and the intensity of football passion to a new level. From now on, players will have even more opportunities to influence the outcome of the match by dragging the defenders to the first marker, fighting for the fumble at the base of the pyramid, or hiding in the "envelope" at the time of the attack. Madden NFL 10 uses new animation technology to ensure that the intense Fight For Every Yard doesn't stop before the final whistle.