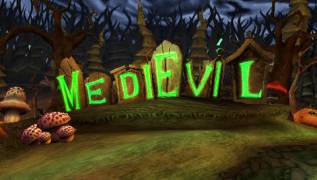 The third part of the MediEvil game series will tell about the new misadventures of the "fearless" knight Sir Daniel Fortesque. I must say that Sir Dan is not a typical knight. He has never been a hero and a daredevil in life, besides, by an unfortunate accident and malicious intent of the villain Zarok, he has long since left this world in his first journey through the kingdom of Gallowmere.

But the villain miscalculated - the knight did not just die. He became not just dead, but dead and fearless! But really - why be afraid, if already dead? So now is the time to deal with the villains and prove yourself a real hero!

A hundred years have passed since the last wanderings of Sir Dan, and the bony hero, who lost his lower jaw in adventures on the PSOne platform, sets off on a new exciting journey. This time on the PSP portable entertainment platform.

Rising from a cozy grave, Sir is waiting for a lot of huge, creepy and funny game locations that have changed over the century and become even more fabulous kingdom of Gallomer, as well as more than 70 different mini-games.

Crowds of terrible monsters (more than 30 types), a variety of weapons (axes, axes and other clubs) and, of course, Sir Dan's real bone "kung fu" ... But this is not the most wonderful thing in the new travels of the best of knights. The further into the forest, the stranger and stranger Sir Dan will feel. After all, now he is not alone - for a century of sleep, a small genie has settled in his skull, so that a split personality can no longer be avoided. And psychotherapists, alas, are powerless.

Humor and heroics are cool and fun, and a whole new exciting adventure in the MediEvil universe is just great!
To understand all the twists and turns, it is worth talking with the Voodoo witch. Well, timid lovers of white magic can take the time to figure out the game and its history on their own by reading parchment scrolls with notes from Sir Dan himself.

Multiplayer mode is supported - up to 16 players simultaneously via Wi-Fi. Time with friends can be spent playing three exciting and dynamic mini-games.