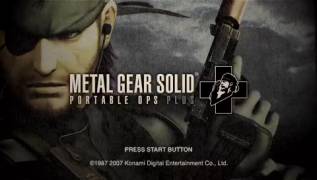 There are still many white spots in the biography of the legendary agent Snake. The permanent hero of Metal Gear Solid is famous as a top-class spy, capable of infiltrating any, even carefully guarded, secret facility unnoticed. But what is known about his past? Who knows about the tragedies that changed his life forever? Metal Gear Solid: Portable Ops gives PSP owners a unique opportunity to lift the veil of secrecy. You will become direct participants in the events that were previously hidden in the most hidden corners of the saboteur's memory.

Metal Gear Solid: Portable Ops Plus is a continuation of the series and will be a real gift for all connoisseurs of the MGS universe. In the game we are waiting for new multiplayer modes, characters and missions. The emphasis is on the multiplayer part, but the single player mode is also not forgotten: the game has a new Infinity Mission option, where you will meet familiar characters such as Roy Campbell, Raiden and even the aged Snake from Metal Gear Solid 4.