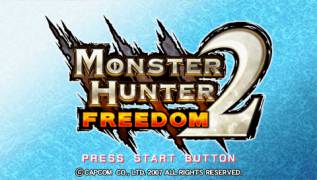 Monster Hunter Freedom 2 has improved the points and experience system, as well as trade and exchange schemes. The heroes will finally have their own homes, where they can return after the hunt. You can change the appearance of the character using ammunition and various equipment. The developers promise that the game will be constantly updated with new tasks that can be downloaded for free via the Internet.

In addition to the single player game, there will be a collective mode via Wi-Fi. Up to 4 players will be able to join forces, complete complex tasks and defeat terrible monsters that are simply impossible to deal with alone. There will also be a two-player mode in the game, where you will have to compete in agility and speed in finding jewels, and a lot of mini-games will help you pass the time quickly.