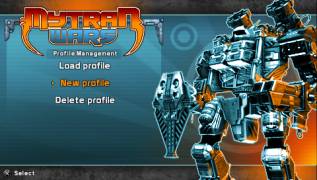 The PSP game Mytran Wars is a turn-based strategy game with elements like SCI-FI created by Stormregion, which is famous for creating high-profile and legendary titles like Codename: Panzers Phase One and Rush for Berlin. This is the very first developer's edition for PSP portable consoles, which, it is already clear, turned out to be extremely successful. The events of the game Mytran Wars unfold in the 23rd century: all the natural resources on planet Earth have already been exhausted - and as a result, a fierce war begins for valuable resources between people and all sorts of extraterrestrial races. Gradually, huge robots are also drawn into this conflict, which equally successfully fight both in the sea and on land, and even in space itself.

In addition to very high-quality and wonderful graphics, we are just waiting for a great storyline, which is accompanied by beautiful videos, a fairly well-thought-out interface and very convenient controls, as well as very incredibly addictive gameplay that will interest not only fans of this genre, but also all other players.