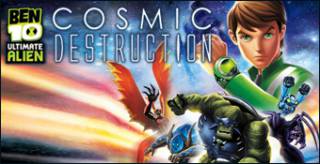 Ben 10 Ultimate Alien: Cosmic Destruction is a continuation of a series of games based on the animated series "Ben 10".
Psyphon (a former assistant of Vilkags) wants to find the Galvin artifact in order to destroy the Earth and take revenge on Ben, so Ben is trying to find the artifact and save his home planet. For the first time in any game in the Ben 10 series, the "Quick Time Events" feature will appear, which will allow you to instantly play boss fights and play puzzles too, we will also return the "Quick Switch" feature, which will allow us to immediately turn into other aliens forms. Ultimate forms will only be available for Humangozavar, Fiery, Echo Echo, Spider Monkey, Winged.