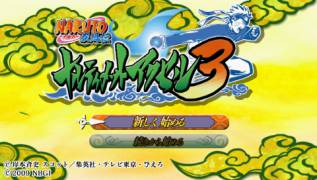 This game is CyberConnect 2's answer to the actions of Namco Bandai America, which in turn announced its project called Naruto Shippuuden: Legends Akatsuki Rising. The site said that the game is strong similar to Naruto Uzumaki Chronicles, whose rating was not very high. What about NSAN 3 - this game will be a cult continuation of the games in the series - it is considered that this part will be better than all the previous ones. Also in the game will be present such characters as Suigetsu, Jugo, Karin. The water and fire effects are very similar to those in Naruto Ultimate Ninja Storm. There will also be support for up to 4 players in the game. All we knew from Wikipedia is that Naruto Shippuden Narutimate Accel 3 will be released on PS3. But no!!! The sequel to the game returns to the PSP.