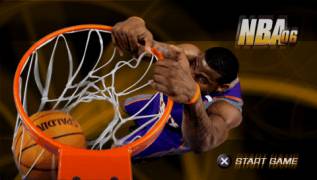 NBA & #39; 06 for PSP expands franchizes with numerous a gameplay of achievements, including improved artificial intelligence (A. I.), mechanics of firing, animation of the player, and new mini-games to create the most saturated, realistic experience basketball today for the portable device. NBA & #39; 06 for PSP the trade system card where players can take to allocate realizes plays took as virtual cards and to hold them as objects of a collecting or to share with others