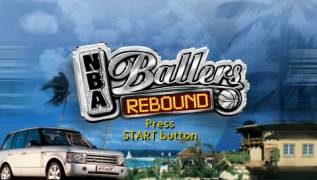 NBA Ballers: Rebound will help you create your dream basketball player with everything from trendy outfits and expensive accessories to luxurious houses and cars. But nothing comes from nothing, so the splendor of a beautiful life will have to be built on the skill of possession of the ball. Only the best of the best can become an NBA superstar. Create your character from over 100 editor combinations and go head-to-head with the best basketball players on the planet as you make your way to global glory. PSP exclusive modes include Dunk Fest and King of Thieves, among others.

New arenas for showdown. The PlayStation Portable version of the game featured locations that were not present in the PlayStation 2 version.

Your character - your ideas. A large number of combinations of the character editor allow you to customize the appearance and parameters of the basketball player in hundreds of different ways.

Earn and spend. With the ballers credits earned from matches, you can buy new abilities, clothes, cars, and even houses.