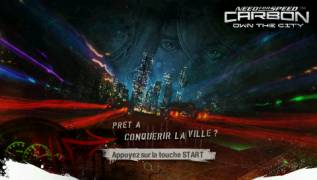 Need for Speed Carbon: Own the City
PlayStation Portable - PSP

Steel beauties sparkle chrome at starting line. Motors compete in loudness. Nerves are tense by guitar strings. Wave of the graceful female handle & mdash; and all participants at reckless speed break in rapid flight, leaving only a smoky mark from the heated tires. A lightning slipping quarter after a quarter, forget uncertainty and fear. In your power inhuman power, hundreds of horses under a brilliant cowl! With their help you will prove the right to be called as the king of roads in a new episode of the automobile saga Need for Speed.

of the Competition in the city where you have to win honor and respect of rivals from different areas. You very much risk, throwing down a challenge to cool children on expensive wheelbarrows, and can lose everything. However without risk there is no victory and recognition & mdash; even where the best of the best, the winner always only one compete. Dangerous competitions will surely draw attention of police. And when the situation will be heated to a limit, you should leave city streets and to postpone races to the well-known canyon Carbon fabrics. Here also the real tests will begin!

of Feature: Become the king of races.
From now on first prize & mdash; not money and not glory, but comprehensive power. Participating and winning arrivals, you quarter after a quarter subordinate yourself all local street-reysersky & laquo;