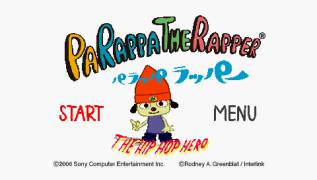 Rap is not just a musical direction, but a whole lifestyle that appears in a completely unusual form in the vastness of the PaRappa The Rapper universe . A game from colorful, extraordinary masters simply could not turn out "the same as everyone else." Amazing music from the Japanese composer Masai Matsura and an unimaginable world, invented by American artist Rodney Greenblat, will forever be remembered by everyone who encounters them. First appeared on the Sony PlayStation ten years ago, PaRappa the Rapper gives PSP owners a bouquet of bright emotions, a charge of vivacity and a sea of ​​life-affirming humor.

The protagonist of this crazy story, Parapp the puppy, fell hopelessly in love with the Sunny Fanny chamomile. But in order to win the heart of a beautiful lady, it is not enough to compose folding texts and read them to rhythmic melodies. The young man sets off on a journey through a colorful world to comprehend the many wisdoms necessary for a real man, and his exceptional musical abilities help to get out of the most difficult situations with honor and a smile.