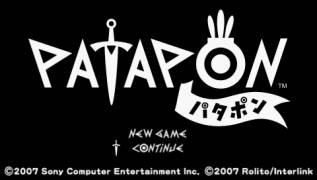 The game tells us the story of the Patapons - a tribe of cute, but warlike creatures. They go on a journey to the ends of the earth, and along the way they will have to fight enemy armies and giant monsters. Simply put, imagine a mixture of Loco Roco and the movie "300 Spartans". Here is such a game. At its core, like Loco Roco, this is a 2D action platformer with a strong musical component. The player controls his soldiers with a series of musical beats. There will be six rhythms in total - for marching, attacking, defending, strengthening, retreating and using magic. Each soldier can be given a variety of weapons and armor, as well as arrange them before the battle. There will be around 30 different types of missions in the game, including hunting, escorting, and boss battles. Separately, it is worth noting the unique graphic style of the game.

The game was designed by French designer Rolito, who is known for his abstract style in creating collectible toys, animations and websites. Indeed, the style of Patapon is different from Loco Roco, but at the same time remains recognizable. There will also be five musical mini-games in Patapon that will allow the player to earn additional bonuses.