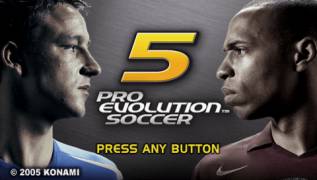 The trumpet roar of the stands, the heady taste of victory, the bitterness of defeat and crazy excitement - all this and much more in Pro Evolution Soccer 5, the next football hit from Voltage and Konami. Realistic graphics, "live" weather, believable animation and intuitive controls will forever change your idea of ​​virtual football. And hundreds of real players and clubs will finish off the skepticism, if any. Challenge yourself, find out the limit of your capabilities, find yourself in the center of events! Passions run high in local meetings, six national leagues and world championships! Fifty-seven national teams and one hundred and thirty-six professional clubs are ready to challenge you.

Meet the new champions! For the first time in the history of Pro Evolution Soccer, Arsenal, Chelsea, Galatasaray, FC Porto and, just imagine, Dynamo Kyiv will take to the field!

More stadiums, good and different! The most intense matches of the 2005 season will take place on the pitches of Mestella (Spain), Riazor (Spain), Newlands (South America), Saitama (Japan) and Berlin Olympiastadion (Germany).

The picture on the screen is not worse than the broadcast of a live match. The players are worked out to the smallest detail: every finger of their hand moves, and the annoyance from the red card and the joy of a goal scored are reflected on their faces.

Football at any time of the year. Some games are held in winter: during the snowfall, the field is covered with a white veil, and the players exhale steam in the cold.

You are both a tactician and a strategist. Each player has a unique and inimitable technique of the game. Your task is to achieve coordinated actions on the field from the wards of the "stars", because not singles, but teams win! At your service is a complete package of tools for tactical and strategic planning: prescribe routes for breakthroughs and passes, train dribbles and corners. You are challenged by the most serious rivals, so don't hit your face on the grass!

New opportunities for collective play. Play your best matches with your friends by networking game systems via Wi-Fi wireless protocol. You can also connect your PSP to the PlayStation 2 and download commands created on the "older" console to it.