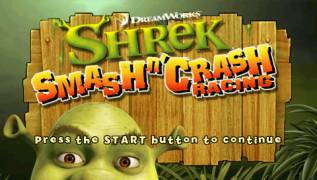 The heroes of one of the funniest cartoons come to life on your screen and appear in a completely new quality! Shrek, Princess Fiona, the inimitable Donkey and a great many other fairy-tale characters arrange real survival races! The scene of action is the most picturesque and at the same time dangerous corners of the fairy-tale kingdom. But the cartoon characters only on the screen seem so good-natured! In fact, they are ready to snatch victory with their teeth, forgetting about the rules. There are no traditional limits in Shrek Smash 'n' Crash: you can smash opponents into each other, set up treacherous crashes to drop your opponent into a deep chasm, and even knock racers astray with powerful magic!

Favorite characters in a new look! Shrek, Fiona, Donkey, three little pigs and eight more familiar characters will appear before you in the form of desperate racers!

Such "cars" you will not meet in life! Instead of cars, cartoon drivers use the most incredible "vehicles", among which the bull and the dragon are the most unassuming.

Fairy rides! In a magical land, they use not ordinary roads, but the most incredible ways. Ride windmill wings, painted bridges, narrow paths with moving gates and other incredible routes.

Racing without rules! If you are in the tail, this is not a reason to despair. With the help of magical bonuses scattered around the track, it is easy to break into the leaders again. Use fairy dust, ogre power, swamp gas and other forbidden tricks to win the race.

A good weapon is vital! Tricky adversaries made up of Fairy Godmother workers, knights and vicious spiders seek to disrupt the races, but each character has their own secret weapon. The Donkey has a microphone that amplifies his already unbearable singing, while Pinocchio has a sharply lengthening nose. The rest of the characters have equally funny self-defense tools!

Don't miss the joke! Heroes not only compete with each other, but also release sparkling barbs. Shrek Smash 'n' Crash is a sea of ​​laughter and a powerful charge of good mood for the whole family.