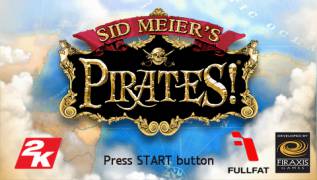 Who could think that the boundless Caribbean Sea together with all pirates of Cyd Meyer will sometime be located in a pocket?! On the compact PSP console there was that game that already won love of millions of admirers and world recognition twice. Now searches of treasures, hijacking of merchant ships, storm of unapproachable fortresses will become an integral part of your life again! In destiny of the freebooter of the romantic always goes side by side with deadly risk. In Sid Meier' s Pirates! you & mdash; the brave adventurer concordant on any adventure for the sake of achievement of the treasured purpose. Having gathered the first team and having bought the small vessel, you will go to a dangerous travel towards to wealth and glory! You serve the king or be engaged in robbery, look for treasures or trade. Take fortresses, buy the ships and once you surely will become a thunder-storm of the Caribbean Sea! Of course, if before you are not sent to a forage to sharks. The glory waits! The list of urgent matters is simply huge! Look for treasures, attack the ships, storm fortresses, but do not forget also about personal motives. What can be more important than the secret of the gone relatives? Convenient management! A game is completely optimized under features of PSP. The wide screen allows to give quickly orders, keeping at the same time majestic beauty of sea landscapes. Night diversions and city fights! The real pirate is able to survive not only in the sea. Make the way to carefully protected cities and if to notice you, fight for life as the wolf driven into a corner! Art of possession of a saber should be mastered as carefully as skill of management of a sailing frigate. Fight of captains! The enemy team is strong until her leader is living. Only in a fair fight between two captains the destiny of the ship, treasures and invaluable glory will be decided. Pirates of the ships do not buy! Capture of floating fortresses on a boarding & mdash; it is the whole mini-game. The break on the deck, occupation of the cabin and search of the enemy captain takes the breath away. So far the leader of enemy team is living, not to break resistance! All will have enough treasures! In a collective game black flags over sails will be lifted by four heroes! All will have enough adventures in boundless waters of the Caribbean Sea, game cards are huge! & nbsp;