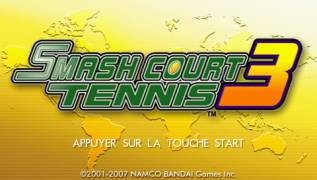 Anyone who has ever set foot on a tennis court will never forget the intoxicating feeling of freedom and burning excitement. Charming, inexplicably attractive sport combines speed, strength, assertiveness of wrestling and grace of dance. It is he who is deservedly considered one of the noblest disciplines, worthy of the powers that be. Today you have the opportunity to join the tennis culture. Test your skills and fight for the title of the first racket of the world! If you are confident in your abilities - go ahead! Smash Court Tennis 3 will show you real tennis!

The path of a young champion is open before you. Pass it from the very beginning to the victorious final, becoming the first racket of the world. In Smash Court Tennis 3, literally everything - appearance, professional skills and the athlete's own playing technique - depends only on you! Get ready for a tough fight against the best of the best. Climbing the tournament ladder will not be easy, but the coveted prize is worth any effort!

Add. Information: "Stars" of the world championship! Smash Court Tennis 3 brought together the best tennis players from around the world. Each of them has a recognizable appearance and completely copies the style of play of its prototype. But in order to defeat eminent rivals, you will have to develop your own tactics.

Everyone plays! Even if you have never held a racket in your hands, it does not matter. Smash Court Tennis 3 features twenty-four practice episodes to challenge everyone.

Strive for excellence! At the very beginning of his career, a young tennis player cannot compete with champions. But over time, the impact force, accuracy and other indicators grow. Take the time to practice, and the results will exceed expectations!

Rest between matches. The whirlpool of tournament passions can quickly exhaust the players. To avoid exhaustion, do not forget to relax and have fun. A vibrant collection of mini-games including Pac-Man Tennis, Galaga Tennis and Bomb Tennis will help you relax and have fun!