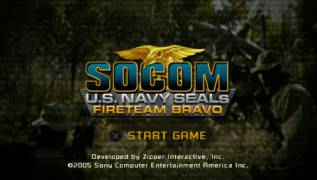 The famous "fur seals" immortalized their name not only in the history of special services, but also in the world of electronic entertainment. Projects of the SOCOM series triumphantly march across all platforms, deservedly receiving the love and respect of the players. Perhaps no other project has reflected so vividly, believably and naturally the harsh romance of everyday special forces.

Now the SEALs have gained even greater mobility. The PSP-exclusive version of SOCOM: US Navy SEALs Fireteam Bravo in no way copies its famous predecessors. The game has absorbed all the best from the previous parts of the series, flavoring the usual combat routine with a fair amount of unique actions. Combat missions in Chile, wireless shootouts with friends, brand new missions, and it's all in the palm of your hand!

The fight against terrorism knows no boundaries! Fourteen single player campaign missions scattered around the world. The highlight of the program is a combat mission to rebellious Chile.
The fate of the platoon is in your hands. As a squad leader, you must give tactically competent orders. Subordinates will unquestioningly perform any maneuver, but in case of a mistake, their death will be on your conscience.
Each operation can be performed twice! After successfully completing a mission in the campaign, you can return to it in Instant Action mode. At the same time, combat missions, the location of opponents and objects on the level will change.
It's safer to fight shoulder to shoulder. Go on missions with friends, with wireless networking it's easy! You can even start your own clan in the game to compete with other squads!
An unprecedented mix of platforms! SOCOM: US Navy SEALs Fireteam Bravo contains so-called Crosstalk operations. These mission scenarios are related to specific episodes of SOCOM 3: US Navy SEALs for PlayStation 2. Upon completion of the Crosstalk operation, you will receive a special notification. Then, by connecting the PSP to the PS2 via USB and transferring the data to the PS2 memory card, you will change the scenario of the corresponding mission in SOCOM 3: US Navy SEALs. Thus, your actions in SOCOM: US Navy SEALs Fireteam Bravo affect the combat operations of SOCOM 3: US Navy SEALs!