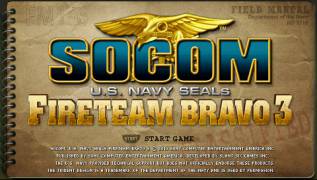 Alexander Gozorov is a man who does not want to be discovered. The former KGB agent, now closely associated with the Russian mafia, cracked down on everyone the secret services sent after him. But the hunt for Gozorov will not stop, because he has information about the location of weapons of mass destruction...

SOCOM: US Navy SEALs Fireteam Bravo 3 marks the return of the legendary Fireteam Bravo series to PSP. The game was created with the participation of the command of real American Navy SEALs. At the heart of Fireteam Bravo 3 is a squad of four elite fighters on the hunt for weapons of mass destruction and the pursuit of former KGB agent Alexander Gozorov. You can complete missions on the success of which the fate of the whole world depends, in the company of partners controlled by artificial intelligence, or together with other players.

* Teamwork. The well-coordinated actions of the fighters of the detachment are the key to the success of any operation. The group must behave like a single organism
* Shoulder to shoulder. SOCOM US Navy SEALs Fireteam Bravo 3 can be played with friends - up to 4 players are allowed
* You can connect to an already started game at any time, in addition, Fireteam Bravo 3 has a spectator system and voice chat
* Fire from cover. To survive in battle, you must correctly select the firing position and hide from enemy bullets in the shelter
* Exciting campaign. An interesting, really strong plot in the game is combined with a brilliant presentation of events
* Combat awards. By completing tasks alone or with friends, you can unlock new weapons, earn medals and award ribbons
* Battles with each other. In collective mode, from 2 to 16 players can play against each other