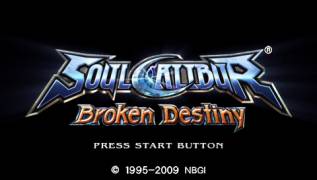 According to Gamespot, Broken Destiny looks exactly like a port of the fourth part, but the developer himself assures that this is not at all the case. In addition to the return of old heroes Taki, Mitsurugi, Tira, Astaroth, Ivy, Cassandra, Voldo, Siegfried, and Hilde, a new fighter will appear in the game - using a blade attached to his hand and possessing a magnificent Dampierre beard.