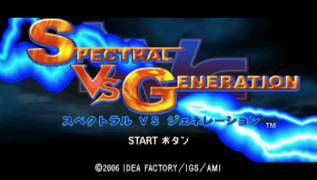 Spectral vs Generation for PSP is a new two-dimensional fayting in which the most popular heroes from the games Spectral Souls and Aedis Eclipse:Generation of Chaos take part. Quite good graphics in the best traditions of the Japanese fayting, numerous combos and charismatic characters will not allow you to start missing for a minute!

of Spectral vs Generation it:
- a Wide choice of the single modes
- the Classical gameplay in the best traditions of a genre
- the Network game in the AdHoc mode will allow you to battle in a deadly fight with friends