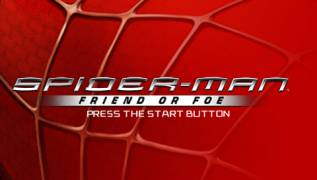 Game & quot; Spider-Man: Friend or Foe" will transfer you to the world of comics in which the main character Spider-Man. You can participate in the most fascinating fights at the same time not only on Peter Parker's party, but also on the party of negative characters! It was not yet! You will begin the preliminary choice to accept whose party, state to prove to be from the good and bad party. Besides during the game you will be able to choose to yourself the additional workmate with you during whom game process will switch, playing one other character.

After you will overcome the old enemies they will join ranks of your army. You will be able to battle against enemies on the most different arenas, opening new of them after the victory in each round. You will be able to change clothes of Spider-Man, for a black suit which will provide you new skills and other advantages.