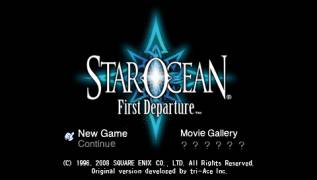 Star Ocean, released back in 1996, has never been officially released outside of Japan before. Star Ocean: First Departure is a remake of an imperishable hit, the greatness of which for the first time can be appreciated by players in Russia, Europe and the USA. It differs from the original with completely redrawn backgrounds, an improved combat system and several new characters. However, the unusually exciting story has migrated to the new game unchanged - space adventures await!

Cosmic date 346. Planet Roak. Soldiers of the city garrison Roddick, Milly and Dorn go on another boring patrol. Only a few minutes remain before the catastrophe ... A strange plague falls on Roak like snow on his head. People one by one begin to turn into stones. Only miraculously manages to pick up the patrolmen on board the reconnaissance ship of the Earth Federation. Roddick and his associates learn that the monstrous epidemic is far from being an accident, but a deliberate attack using biological weapons. But who is behind it and how to save the planet?