GEN
Attack of the Mutant Penguins 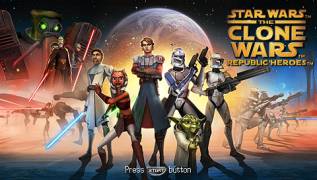 Peace in the vast galaxy remains a ghostly dream. It is too early to lay down arms and celebrate victory - the universe still needs heroes who are ready to fight hatred, meanness and deceit. Need you! Star Wars The Clone Wars: Republic Heroes fills in the gap between the first and second seasons of the Star Wars animated series. The Clone Wars" and allows you to turn from a spectator into a participant in space adventures.

For the first time, play as your favorite Jedi Knight or Clone Warrior, from familiar characters like Anakin Skywalker to new heroes like Clone Captain Rex. Having risen to the defense of goodness and justice, you will have to uncover the separatist plot and return peace to the galaxy. With simple controls and content equally engaging for players of all ages, Star Wars The Clone Wars: Republic Heroes connects all generations of Star Wars fans.